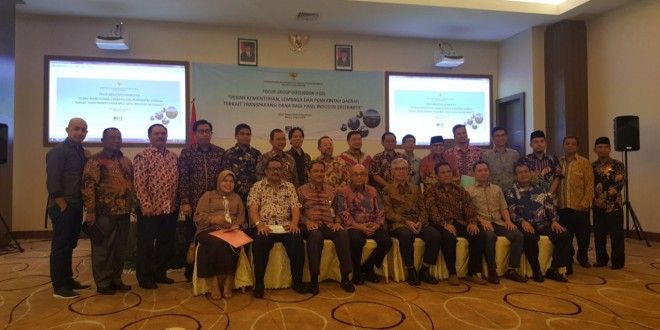 In an effort to uphold the principle of transparency in the extractive industry sector oil and gas at the national and regional levels, the Coordinating Ministry for Economic Affairs held Focus Group Discussions (FGD) at Aston Hotel, Batam, April 9, 2018, Riau Islands. This activity discusses the distribution of Revenue Sharing Funds (DBH) in the extractive industry sector. DBH is a fund sourced from APBN revenue that is distributed to regions based on a certain percentage figure. The discussion of the DBH issue is closely related to the principle of transparency which has been echoed by the Extractive Industries Transparency Initiative (EITI) as a global standard for extractive industry transparency which is currently implemented in 51 countries, including Indonesia. EITI continues to encourage that the distribution and utilization of DBH can be carried out transparently in order to improve regional development, especially in natural resource-rich regions that have not been able to maximally utilize natural wealth for the welfare of the community.

“For many regions, revenue from DBH oil and gas and mineral and coal is the largest contributor to local revenue in the Regional Budget (APBD). Therefore, in line with the principles of transparency and accountability adopted by EITI, we highly prioritize that DBH issues and some other issues can be followed up on the discussion, “said Deputy for Energy Management Coordination, Natural Resources and the Environment, Coordinating Ministry for Economic Affairs, Montty Girianna.

Although regulations related to DBH have been regulated in the laws and derivative regulations, some parties still consider the distribution of DBH from natural resources to have weaknesses, one of which is due to the influence of world oil price fluctuations and other commodity prices, as well as the rupiah exchange rate. This uncertainty often makes the regions wrongly determine the estimated number of DBH received, thus disrupting Regional Government budget planning. Other cases such as those that occurred in Bojonegoro, where the district area close to the location of the well and bear the social impact of the exploitation of natural resources did not receive DBH allocations because the district was different from the location of the well. Whereas areas that are far away and not directly affected by natural exploitation receive DBH allocations because of one province with a well location. This further encourages transparency efforts to improve the governance of DBH distribution mechanisms.

In his presentation, the Regional Secretary of Riau Province, Ahmad Hijazi said “The Riau Provincial Government requested to be given access to find out other components of deductions and levies in the calculation of Oil and Gas DBH. DBH disbursement that is not timely is very inhibiting and the calculation is more in line and less channeled yet transparent. “Ahmad added that there had been demands from the KPK Energy Sector Coordination and Prevention (Korsubgah) action plan to open connected data from SKK Migas, Ministry of Energy and Mineral Resources with Ministry of Finance.

EITI seeks to encourage transparency in the mechanism of allocation and distribution of DBH so that there is trust between the Central Government, Regional Governments and the public. The 2015 EITI report that has been published has included DBH information up to the District level.