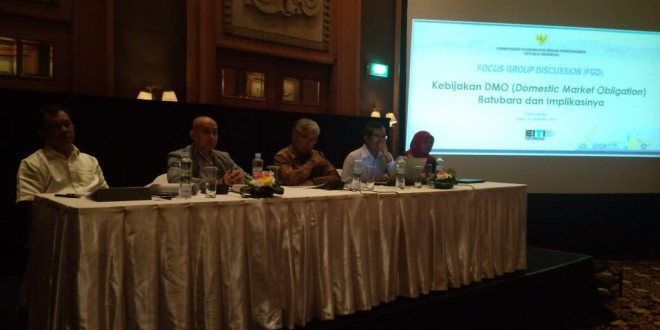 Press Release: Importance of Transparency for Improving Governance in the Mining Sector

Jakarta, September 26th, 2018 – In an effort to uphold the principle of transparency and efforts to improve governance in the extractive industry sector (oil and gas), the Coordinating Ministry for Economic Affairs held a Focus Group Discussion:  Domestic Market Obligation (DMO) of coal and its implications in Aryaduta Hotel. This activity is one of the efforts carried out to meet the standards of the Extractive Industries Transparency Initiative (EITI) which currently has been implemented by 51 countries, including Indonesia. EITI continues to encourage transparency in the governance of natural resources, including the mineral and coal sector to the public.

“Better verification is needed to record thousands of mining sector companies that only contribute 6 percent of the national PNBP. With better governance, it is expected that the state revenue from the mineral and coal sector can increase, “said Assistant Deputy for Extractive Industries, Coordinating Ministry for Economic Affairs, Ahmad Bastian Halim.

In the coal DMO policy, the Ministry of Energy and Mineral Resources has issued Ministerial Decree No. 23/2018 which requires 25 percent of the company’s coal production to be sold domestically. However, in its development, in order to encourage exports and reduce the trade balance deficit, the Ministry of Energy and Mineral Resources has revised the Decree to Ministerial Decree 1924/2018 by stipulating an additional production quota of 100 million tons for exports which are not subject to DMO obligations. So that the coal production target which was originally 485 million tons increased to 585 million tons for 2018.

On the other hand, in the 2015-2019 National Medium Term Development Plan (RPJMN), the development of the mining sector is prepared with the spirit to support sustainable development in order to obtain optimal benefits for national interests. Therefore, there are efforts to limit the exploitation of mining products so that they are not too excessive. This policy, among others, is carried out by limiting coal production at a production level of around 400 million tons per year, while implementing the obligation to sell domestically or DMO with a target of 60% by 2019.

Through transparency efforts, EITI seeks to encourage improved governance, including policies on coal DMO. The hope is that there will be input for the government in determining the future policy of the coal mining sector.

“With the public discussion, it is expected to provide input, criticism or policy options, while encouraging improvements in governance in the extractive industry sector, added Bastian