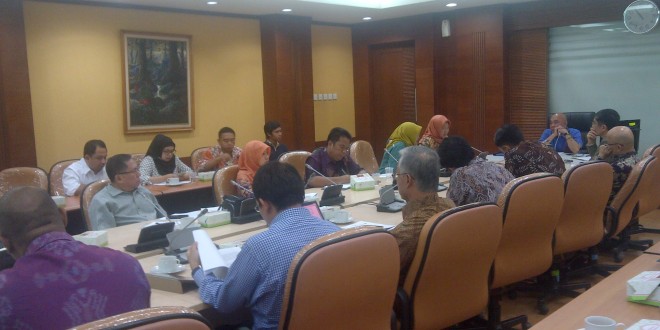 The mining contract disclosure coordination meeting was held on Tuesday, March 21, 2017. The meeting was scheduled to discuss the decision of the Central Information Commission (KIP) No.197 / VI / KIP-PS-MA / 2011 concerning public information disputes submitted by the Center for Public Information Development and has permanent legal force. In the decision, it was stated that the Ministry of Energy and Mineral Resources must open a copy of the contracts from several mining sector companies: PT Freeport Indonesia, PT Kalimantan Timur Prima Coal, and PT Newmont Mining Cooperation. The verdict was final after the ESDM Ministry did not attempt an appeal after 14 days of the decision. This is different from the oil and gas sector where BP Migas filed an appeal and was granted by the Supreme Court (MA) so that the KIP decision was canceled. One of the reasons granted by the Supreme Court is that BP Migas is considered not a public body. It is an agency financed by the state.

Although the verdict mentions the opening of a copy of the contract, the opening remains limited, especially regarding information about Indonesia’s natural wealth. Deputy Chairperson of KIP, Evi Trisulo said that the copy of the contract can be opened but there must be a listing of which parts can be opened and which parts are excluded, especially those concerning the country’s wealth. Evi added that it would be better if the listing had to go through a consequence test so that it would not conflict with other rules, for example colliding with tax rules. Public testing is also needed because the consideration is the public perspective, not the perspective of officials or institutions.

The ESDM Ministry said that they were ready to comply with the KIP decision regarding the decision to open a copy of the contract. Heryanto from the Legal Department, Directorate General of Mineral and Coal said the Ministry of Energy and Mineral Resources was willing to open a copy of the contract, but they objected if all were included including supporting documents. Heryanto added that the Ministry of Energy and Mineral Resources had begun to inventory any part of the contract that could be opened and excluded. There are some crucial things that cannot be opened such as coordinates and natural wealth. If the coordinates of the potential natural resources are opened, it will immediately be a lot of illegal mining. Likewise, the secrecy of Indonesia’s natural wealth in the eyes of the international community, for example there is now the potential for a gold mine location that is very large. The meeting decided that there would be a follow-up to determine which parts of the contract could be opened and which parts should remain closed.