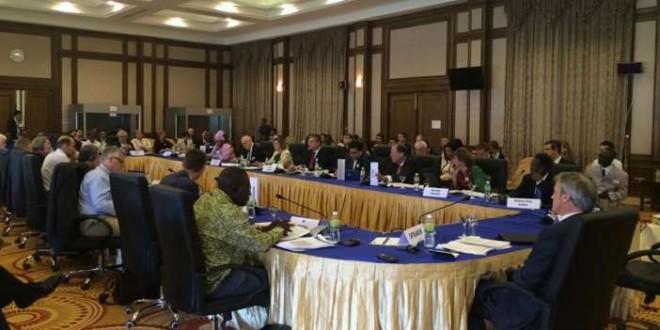 Clare Short: Indonesia shows that also a country with a large natural resource sector can be transparent.

Wednesday, 15 October 2014 – Indonesia was today accepted as a full member of the EITI.

As ‘compliant’ with the global EITI transparency standard, citizens of Indonesia have access to extensive information about how their natural resources are governed. Industry, government and civil society in the country are working together to inform the debate about the management of its oil, gas and mineral resources.

The international EITI Board designated the country ‘EITI compliant’ at its meeting in Myanmar and congratulated the Government of Indonesia for its sustained commitment and leadership in the implementation of the EITI.

“By reaching compliance, Indonesia has shown the world that also a country with a large and complex natural resource sector can be transparent about its resource revenues. What Indonesia EITI has achieved is no small feat. I look forward to seeing how the country continues to make use of its EITI to embed transparency into its government systems and to ensure that natural resources benefit its citizens.”

“The Government of the Republic of Indonesia is fully committed in implementing the principles of good governance. Indonesia’s heavy involvement in the Extractive Industries Transparency Initiative is part of its good governance programs and is a show of commitment in creating a transparent and accountable system of governance.”

“The naming of Indonesia as EITI compliant is a privilege and a proof that with hard work and resolute will, bureaucratic and governance reform has transform Indonesia into a country with a stable, transparent and accountable system of governance. We would like to thank our friends and partners in the EITI International Board and Secretariat, as well as the World Bank, who have provided us with cooperation and assistance in achieving this compliant status.”

“Given the scale and very complex nature of Indonesia’s extractive sector, achieving EITI compliance is an outstanding achievement. I congratulate Indonesia’s multi-stakeholder Implementing Team and National Secretariat on their hard work in producing a report covering 230 companies who collectively paid almost US $80 billion to the Government during 2010 and 2011. The World Bank Group looks forward to continuing to support this important work.”

The Board’s decision in full:

The EITI Board designates Indonesia as Compliant with the EITI Requirements as of 15 October 2014. In accordance with the EITI Standard:

In taking this decision, the Board takes note of the complexity of the Indonesian mining sector and the challenges related to tax confidentiality. The Board recognized that Indonesia had taken steps to address these issues, including by issuing waiver letters, develop an inter-ministerial Decree with the aim of addressing the delays that have affected EITI implementation to date, and full government disclosure of all revenues from the oil, gas and mining sector in accordance with EITI requirement 11 (EITI Rules) and Requirement 4.2 (EITI Standard). The Board calls upon the government of Indonesia to increase the coverage of reconciliation of payments and revenues from the mining sector and will monitor progress towards comprehensive reconciliation in the 2012 and 2013 EITI Reports.